We are now 7 weeks pregnant as of Friday just gone, and we’ve had a busy old week!

I have returned to work. What an eye opener that was. I thought I was tired just looking after a baby but this week has really tested me and I’m only working three days. Thursday when I got home, I sat on the sofa and never moved until bedtime and even then I’d fallen asleep and needed to be woken up to actually go to bed.

Paige has had a bout of gastroenteritis. It started on Sunday (my first day at work), I initially thought that the extra nappies were down to her teething but she was still bad on Wednesday so off we went to the doctors, who diagnosed the gastroenteritis. I was told to just keep her hydrated with her milk and water and if she got any worse to take her back. Luckily by Thursday, my next day at work, when she went to her grandparents, she was much better.

We went with Grandma to meet a gorgeous baby boy who was born in March. We know his mummy as she is the lady that does our nails when we go. It was very strange holding a newborn knowing that in a few months it would be me in that situation again of visitors and well wishers wanting to meet new baby.

We went for our first appointment at the midwife and got our pregnancy notes. From what I understand the system has changed and we haven’t officially had our booking appointment (the one where they ask a million questions and take your blood), that comes later. I believe they also send you a letter in the post for your scan now, whereas I had to ring and book with the midwife office for Paige’s 12 week scan. Our next (booking) appointment is on the 22nd May.

We have now told a couple of people we are expecting again but still waiting a few more weeks, if not till we’ve had our scan, to tell everyone. I’m also in two minds about a social media announcement, although it was really lovely reading everyones nice comments the first time round  so we’ll see later on how we feel.

I am now 15 weeks pregnant, (wc 22.6.18) the reason for the week commencing date of a Friday is because my new week starts on a Friday.

In the last few weeks I have had a couple of appointments and a few on the calendar so everything seems a little bit more real now.

I have been booked in with the midwife, the long interview appointment where they ask silly and often unnecessary questions. To be fair, it was quite a straightforward appointment as they had most of the information still on file from my pregnancy with Paige but they wanted to make sure that nothing had changed. And they take your blood to make sure that everything is ok with that and check your blood group (if it’s your first pregnancy). Unfortunately the poor midwife couldn’t get any blood out of me so she referred me to the phlebotomist at the hospital to get the sample that they needed.

I also went for our 12 week scan, I had to go alone as Matt was at school doing his gas qualifications but that was fine with me. Again, this was a fun appointment as we have another little monkey that didn’t want to be seen on the screen. I was sent to get a sugary drink and go for a walk for half an hour so they could try again to see the baby. It worked slightly and they managed to confirm my due date with the measurements of baby but couldn’t do the genetic test they do at this scan. This was fine with me, I have since received an appointment for a blood test for this so we will get a result regardless.

I thought while I was at the hospital I would get my blood done that the midwife couldn’t get the week before (two birds, one stone and all that). What a mistake that was, going alone! As soon as I felt the needle go into my arm my head started to feel fuzzy and the longer it stayed in the worse I felt to the point of almost passing out. I remember hearing the phlebotomist asking if she could carry on taking the blood, I said yes as I didn’t want to have to have another needle stuck in me if they hadn’t got enough the first time. When they’d finished, it took me around 45 minutes to come back round properly and they wouldn’t let me leave the hospital without having something to eat and a cup of tea first!! Luckily I felt ok enough to drive home afterwards but just took it steady and avoided the motorway.

Now we knew that everything was ok, we decided we would now tell family. Paige had been with her grandparents that day as I was supposed to be going to work and when she was brought home we told Matt’s Mum and Dad. We did this by wrapping up a cushion saying “Born in 2018” with a scan picture. I then sent messages to most people as I wanted to include a picture of Paige. Doing it this way has made the pregnancy go very quickly this time but this could also be because we have our little pud to keep us busy and don’t really have the time to sit and over think things like we did the first time round.

We have also booked an early gender scan for 16 weeks 1 day over in Leeds. I am so excited to find out if we are team pink again, or team blue. Either will do but it would be so nice to have a boy as our family would then be complete, minus a doggy (hint to Daddy 😉 ).

We already have a date for our 20 week scan, I’m booked in for my glucose test and have my first appointment with my consultant so we are very busy over the next month or so. It’s also Paige’s first birthday, so lots of exciting things to look forward to. 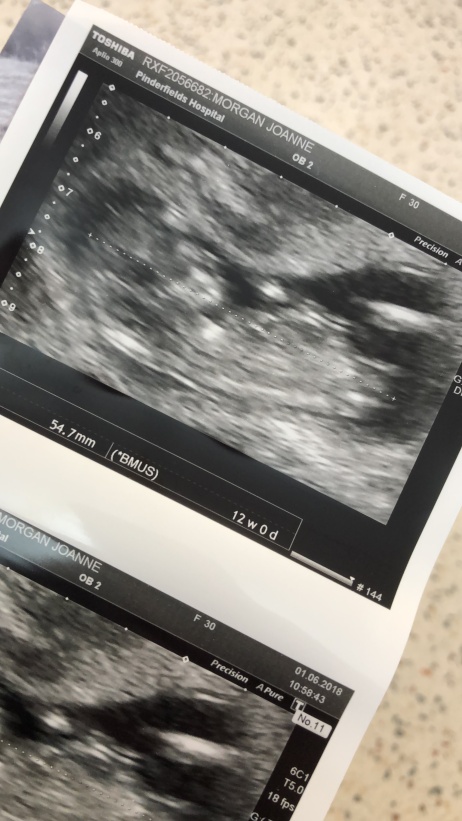 View all posts by haveyouheardaboutthemorgans

Follow Have You Heard About The Morgans? on WordPress.com